Process Explorer is a freeware task manager and system monitor for Microsoft Windows created by SysInternals, which has been acquired by Microsoft and re-branded as Windows Sysinternals. It provides the functionality of Windows Task Manager along with a rich set of features for collecting information about processes running on the user's system. It can be used as the first step in debugging software or system problems.

Process Explorer can be used to track down problems. For example, it provides a means to list or search for named resources that are held by a process or all processes. This can be used to track down what is holding a file open and preventing its use by another program. As another example, it can show the command lines used to start a program, allowing otherwise identical processes to be distinguished. Like Task Manager, it can show a process that is maxing out the CPU, but unlike Task Manager it can show which thread (with the callstack) is using the CPU – information that is not even available under a debugger

Complete all forms to receive your report 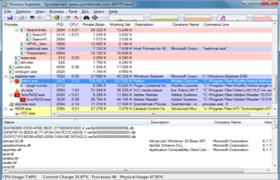