Wireshark is a free and open-source packet analyzer. It is used for network troubleshooting, analysis, software and communications protocol development, and education. Originally named Ethereal, the project was renamed Wireshark in May 2006 due to trademark issues. Wireshark is a popular network analysis tool to capture network packets and display them at a granular level. Once these packets are broken down, you can use them for real-time or offline analysis. Wireshark is a data capturing program that "understands" the structure (encapsulation) of different networking protocols. It can parse and display the fields, along with their meanings as specified by different networking protocols. Wireshark uses pcap to capture packets, so it can only capture packets on the types of networks that pcap supports.

Complete all forms to receive your report 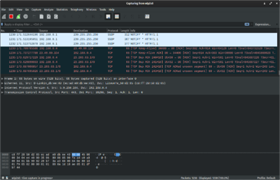